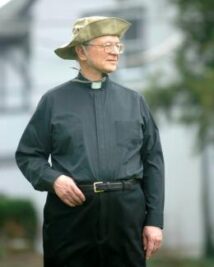 Benjamin J. Urmston, SJ, is the director emeritus of Peace and Justice Programs at Xavier University. Father Urmston has been a guiding force of peace and justice issues there since 1943 when he came to Xavier as an undergraduate and entered the Army. He was in Patton’s army in Europe, also in the Philippine Islands. While in the Philippines, Fr. Ben decided to become a Jesuit and in 1946 he entered the Jesuit Novitiate. Then in 1971, he made his return to Xavier University where he became an instructor of Theology, focusing his teachings on international issues, human rights, and non-violent solutions to the problems of the world. In 1977 he began Faith and Justice Forum, a weekly radio talk show which continued at WVXU until 2005.