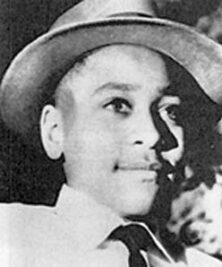 Emmett Till was an African-American teenager who in 1955 was lynched in Mississippi at the age of 14 after reportedly flirting with a white woman.

Till was from Chicago, Illinois, and visiting relatives in Money, a small town in the Mississippi Delta region. He spoke to 21-year-old Carolyn Bryant, the married proprietor of a small grocery store there. Several nights later, Bryant’s husband Roy and his half-brother J. W. Milam went to Till’s great-uncle’s house and abducted the boy. They took him away and beat and mutilated him before shooting him and sinking his body in the Tallahatchie River. Three days later, Till’s body was discovered and retrieved from the river.

His death focused attention not only on American racism and the barbarism of lynching but also on the limitations and vulnerabilities of American democracy. Tens of thousands attended his funeral or viewed his casket and images of his mutilated body were published in black-oriented magazines and newspapers, rallying popular black support and white sympathy across the U.S. Intense scrutiny was brought to bear on the condition of black civil rights in Mississippi.