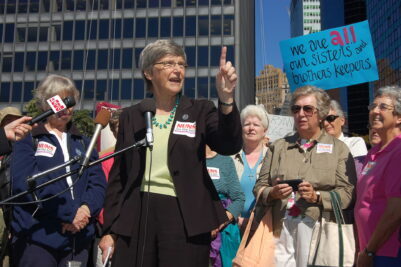 Simone Campbell SSS, is an American Roman Catholic Sister of Social Service, a lawyer, lobbyist and executive director of NETWORK.

In 1978 Campbell founded the Community Law Center in Oakland, California, which she served for the next 18 years as its lead attorney. She practiced family law there and worked on the needs of the working poor of her county in Probate Court.

Campbell was recruited to lead NETWORK in 2004 and continues to serve as its executive director. As a part of her work with NETWORK, Campbell wrote a letter supporting healthcare reform, known as the Patient Protection and Affordable Care Act, and asked leaders of women’s religious orders to sign it. Sixty heads of religious orders and umbrella groups signed and the letter was sent to all members of Congress. The letter contributed to the momentum in favor of the legislation and Campbell attended the signing ceremony for the law.

Campbell also led the Nuns on the Bus project to highlight social issues. In 2012, the first year of the project, the Nuns aimed to draw attention to their work with the poor and to protest planned aid cuts. In honor of her advocacy work she was the 2014 recipient of the Pacem in Terris Peace and Freedom Award, which commemorates the 1963 encyclical of Saint John XXIII of the same name.