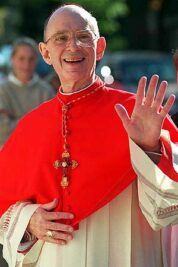 In 1966 Pope Paul VI appointed Monsignor Bernardin Auxiliary Bishop of the Archdiocese of Atlanta. Only 38 years old, the became the youngest bishop in America.

In 1968, he resigned as auxiliary bishop of Atlanta to become the first General Secretary of the National Conference of Catholic Bishops, a post he held until 1972. In 1969 Bishop Bernadin was instrumental in founding one of the conference’s most influential and successful programs, the anti-poverty Campaign for Human Development.

Bernardin was named to the Sacred Congregation of Bishops, elected to the permanent council of the Synod of Bishops and was elected president of the National Conference of Catholic Bishops. He worked to improve relations between Catholics and Jews, strove for better understanding between the Catholic Church and Protestant denominations, and made pastoral visits to Poland and Hungary.

In 1982, following the death of Cardinal John Cody of Chicago, Pope John Paul II chose Archbishop Bernardin, already prominent among his fellow American bishops, to lead the Archdiocese of Chicago.