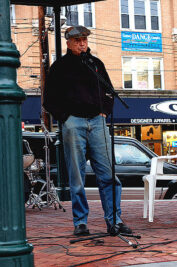 He had a unique form of militancy and radical spirituality in the service of social and political justice that was significant .During the 1960s, he actively protested against the Vietnam War and participated in the “Catonsville Nine” which landed him on the FBI’s “most wanted list” (the first priest to be on that list), on the cover of TIME magazine, and in prison.

For the rest of his life, he continued to be one of the leading anti-war activists in the US. In 1980, with his brother Phil and six others, he founded the Plowshares Movement, an anti-nuclear protest group, that put him back into the national spotlight.

Much of his later work was devoted to assisting AIDS patients in New York City and maintaining opposition to American interventions abroad, from Central America in the 1980s, through the Gulf War in 1991, the Kosovo War, the U.S. invasion of Afghanistan, and the 2003 invasion of Iraq. He was also an anti-abortion activist and opponent of capital punishment, a contributing editor of Sojourners, and a supporter of the Occupy movement. He was also an award-winning and prolific author of some 50 books, a teacher, and a university educator.