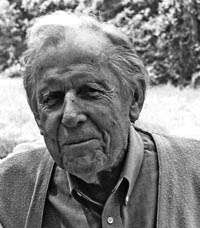 Thomas Berry, CP was a Catholic priest of the Passionist order, cultural historian and an “eco-theologian” (although cosmologist and geologian – or “Earth scholar” – were his preferred descriptors). Among advocates of deep ecology and “eco-spirituality” he is famous for proposing that a deep understanding of the history and functioning of the evolving universe is a necessary inspiration and guide for our own effective functioning as individuals and as a species. He is considered a leader in the tradition of Teilhard de Chardin.

Berry believed that humanity, after generations spent in self-glorification and despoiling the world, is poised to embrace a new role as a vital part of a larger, interdependent “communion of subjects” on earth and in the universe.

Berry said the transformation of humanity’s priorities will not come easily. It requires what he called “the great work” — the title of his last major book — in four institutional realms: the political and legal order; the economic and industrial world; education; and religion.