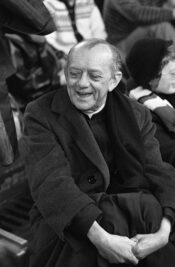 Hélder Pessoa Câmara was a Brazilian Roman Catholic Archbishop. He was the Archbishop of Olinda and Recife, serving from 1964 to 1985, during the military regime of the country.

An advocate of liberation theology, he is remembered for his social and political work for the poor and for Human Rights and democracy during the military regime.

During his tenure, Câmara was informally called the ‘Bishop of the slums’ for his clear position on the side of the urban poor. With other clerics, he encouraged peasants to think beyond their conventionally fatalistic outlook by studying the gospels in small groups and asking what conclusions could be drawn for social change. He was active in the formation of the Brazilian Bishops’ Conference in 1952, and served as its first general secretary until 1964. In 1959 he founded Banco da Providência in Rio de Janeiro, a philanthropic organization to fight poverty and social injustice by making it easier for poor people to receive loans.

He attended all four sessions of the Second Vatican Council and played a significant role in drafting the Pastoral Constitution on The Church in the Modern World. On November 16, 1965, a few days before the Council ended, 40 bishops led by bishop Hélder Câmara met at night in the Catacombs of Domitilla outside Rome. They celebrated the Eucharist and signed a document under the title of the Pact of the Catacombs. In 13 points, they challenged their brother bishops to live lives of evangelical poverty: without honorific titles, without privileges, and without worldly ostentation. They taught that “the collegiality of the bishops finds its supreme evangelical realization in jointly serving the two-thirds of humanity who live in physical, cultural, and moral misery”. They called for openness “to all, no matter what their beliefs”.

Under the guidance of archbishop Hélder Câmara, the Catholic church in Brazil became an outspoken critic of the 1964-85 military dictatorship and a powerful movement for social change. Câmara spoke out and wrote about the implications of using violence to repress rebellion resulting from poverty and injustice in other venues than Brazil. Traditionalist Catholics urged the military government to arrest Câmara for his support of land reform and Câmara’s colleague, Father Antônio Henrique Pereira Neto, was murdered by unknown conservative forces.

A proponent of liberation theology, he was Archbishop of the Diocese of Olinda and Recife from 1964 to 1985, during a period when the country had a series of military rulers. Liberation theology politicized the church’s charitable work and brought criticisms that it was encouraging the armed revolutionary struggles that swept Latin America during the 1970s and 1980s.

In 1971 he published Spiral of Violence, a short tract written when the United States was immersed in a still escalating Vietnam War. It is distinctive for linking structural injustice (Level 1 violence) with escalating rebellion (Level 2 violence) and repressive reaction (Level 3 violence). In it, Câmara called on the youth of the world to take steps to break the spiral, saying their elders became addicted to those escalating steps.