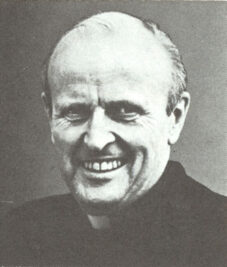 Robert Frederick Drinan, SJ was a Catholic Jesuit priest, lawyer, human rights activist, and Democratic U.S. Representative from Massachusetts. He was also a law professor at Georgetown University Law Center for the last twenty-six years of his life.

In 1970, he was elected to Congress on an anti-Vietnam War platform,  and was re-elected four times, serving from 1971 until 1981. He was the first of two Roman Catholic priests  to serve as a voting member of Congress.

In July 1973 he was the first member of Congress to introduce a resolution calling for the impeachment of President Richard Nixon, though not for the Watergate Scandal that ultimately ended Nixon’s presidency. Drinan believed that Nixon’s secret bombing of Cambodia was illegal, and as such, constituted a “high crime and misdemeanor.”

He taught at the Georgetown University Law Center in Washington, D.C. from 1981 to 2007, where his academic work and classes focused on legal ethics and international human rights. He privately sponsored human rights missions to countries such as Chile, the Philippines, El Salvador, and Vietnam. In 1987, he founded the Georgetown Journal of Legal Ethics. He regularly contributed to law reviews and journals, and authored several books, including The Mobilization of Shame: A World View of Human Rights.