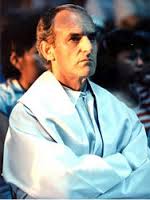 Ignacio Ellacuría, SJ was a priest, philosopher, and theologian who worked as a professor and rector at the Universidad Centroamericana  (UCA), a Jesuit university in El Salvador where he lived and worked for most of his life.

Ellacuría was also a strong supporter and contributor to Liberation Theology. His academic work focused on liberating the oppressed in order “to reach the fullness of humanity”.

The political implications of Ellacuría’s ideas met strong opposition from the conservative religious and political forces in El Salvador and he was assassinated at the UCA in 1989 along with 5 colleagues and two employees by the Salvadoran army. Their murder marked a turning point in the Salvadoran civil war: it increased international pressures on the Salvadoran government to sign peace agreements with the guerrilla organization FMLN and it helped make Ellacuría’s ideas become known worldwide.