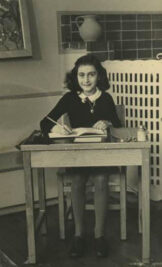 Anne Frank was a German-born Jewish diarist and writer. She is one of the most discussed victims of the Holocaust. Her diary, The Diary of a Young Girl, which documents her life in hiding during the German occupation of the Netherlands in World War II, is one of the world’s most widely known books and has been the basis for several plays and films.

Born in the city of Frankfurt, Germany, she lived most of her life in or near Amsterdam. By 1940, her family was trapped by the German occupation of the Netherlands. As persecutions of the Jewish population increased in 1942 the family went into hiding, but in 1944 the group was betrayed and transported to concentration camps.

Anne’s diary had been saved and was published in 1947. The Diary of a Young Girl chronicles her life from June 12th,1942 until August 1st, 1944 and has been translated into over 60 languages.