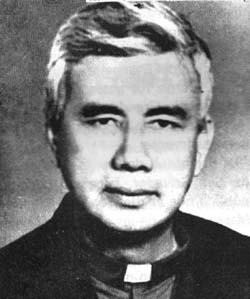 Rutilio Grande SJ was a priest in El Salvador who was assassinated, along with two other Salvadorans, by government forces for speaking out against oppression and for human rights. He was a close friend of Archbishop Óscar Romero and his death inspired the Archbishop to change his attitude toward the government and he began to speak out against the regime as well.