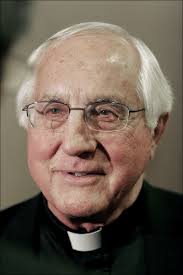 Thomas Gumbleton is a retired Roman Catholic auxiliary bishop of the Archdiocese of Detroit. He founded the Michigan Coalition for Human Rights in December 1980 with former Episcopal Bishop Harry Coleman McGehee, Jr. and Rabbi Richard Hertz.

He was the founding president of Pax Christi USA — an organization devoted to promoting peace, and he remains one of the organization’s “Ambassadors for the Peace.”

He has traveled extensively, given speeches, and has participated in prayer vigils and television and radio appearances. His Sunday homilies  are documented by the National Catholic Reporter, where he also wrote a regular column.

He has been arrested outside the White House several times with anti-war protesters and has been a very vocal opponent of the war in Iraq. He is the only Roman Catholic bishop in America to have taken such action in protest of the war. He has also been arrested for protests against nuclear weapons.

He has also written extensively on Catholic teaching regarding homosexuality and has consistently been a supporter of New Ways Ministry. He has called for homosexual priests and bishops to “come out” and be truthful to themselves and others.

He has been awarded a number of honorary degrees, including a Doctorate of Divinity from a number of education institutions.