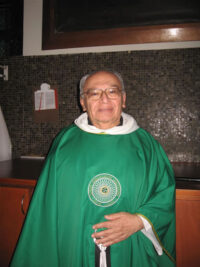 Gustavo Gutiérrez OP is a Peruvian theologian and regarded as one of the founders of liberation theology. He holds the John Cardinal O’Hara Professorship of Theology at the University of Notre Dame. He has been professor at the Pontifical Catholic University of Peru and a visiting professor at many major universities in North America and Europe.

His groundbreaking work, A Theology of Liberation: History, Politics, Salvation, he discusses the notion of Christian poverty as an act of loving solidarity with the poor as well as a liberating protest against poverty.