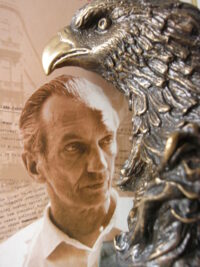 Jan Karski was a Polish World War II resistance movement fighter and later professor at Georgetown University. In 1942 and 1943 Karski reported to the Polish government in exile and the Western Allies on the situation in German-occupied Poland, especially the destruction of the Warsaw Ghetto, and the secretive German-Nazi extermination camps.