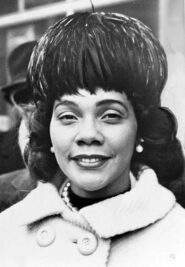 Coretta Scott King was an American author, activist, and civil rights leader, and the wife of Martin Luther King, Jr. from 1953 until his death in 1968. Coretta Scott King helped lead the African-American Civil Rights Movement in the 1960s. King was an active advocate for African-American equality. King met her husband while in college, and their participation escalated until they became central to the movement. In her early life, Coretta was an accomplished singer, and she often incorporated music into her civil rights work.

King played a prominent role in the years after her husband’s 1968 assassination when she took on the leadership of the struggle for racial equality herself and became active in the Women’s Movement and the LGBT rights movement. King founded the King Center and sought to make his birthday a national holiday. King finally succeeded when Ronald Reagan signed legislation which established Martin Luther King, Jr. Day. She later broadened her scope to include both opposition to apartheid and advocacy for LGBT rights. King became friends with many politicians before and after Martin Luther King’s death, most notably John F. Kennedy, Lyndon B. Johnson, and Robert F. Kennedy.

After her death, King was honored for her activism in promoting human rights. King was inducted into the Alabama Women’s Hall of Fame in 2009. She was the first African-American to lie in Georgia State Capitol , and she has been referred to as The First Lady of the Civil Rights Movement.