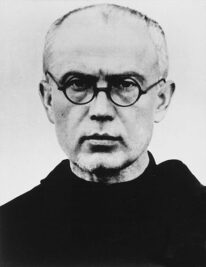 Maximilian Kolbe, O.F.M. Conv. was a Polish Conventual Franciscan friar, who volunteered to die in place of a stranger in the German death camp of Auschwitz.

He was canonized in 1982 and declared a martyr of charity. He is the patron saint of drug addicts, political prisoners, families, journalists, prisoners, Pope John Paul II declared him The Patron Saint of Our Difficult Century.