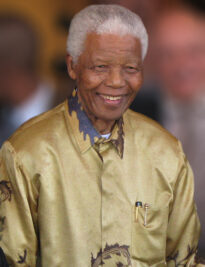 Nelson Mandela was a South African anti-apartheid revolutionary, politician, and philanthropist, who served as President of South Africa from 1994 to 1999. He was the country’s first black chief executive, and the first elected in a fully representative democratic election. His government focused on dismantling the legacy of apartheid through tackling institutionalized racism and fostering racial reconciliation. Politically an African nationalist and democratic socialist, he served as President of the African National Congress (ANC) party from 1991 to 1997.

After the Afrikaner minority government of the National Party established apartheid – a system of racial segregation that privileged whites – in 1948, he rose to prominence in the ANC’s 1952 anti-apartheid Defiance Campaign, was appointed superintendent of the organization’s Transvaal branch, and presided over the 1955 Congress of the People. Working as a lawyer, he was repeatedly arrested for seditious activities and, with the ANC leadership.

He served 27 years in prison, but amid international pressure and growing fear of a racial civil war, President F. W. de Klerk released him in 1990. Mandela and de Klerk negotiated an end to apartheid and organized the 1994 multiracial elections, in which Mandela led the ANC to victory and became president. Leading a broad coalition government, which promulgated a new constitution, Mandela emphasized reconciliation between the country’s racial groups and created the Truth and Reconciliation Commission to investigate past human rights abuses. While continuing with the former government’s economic liberalism, his administration introduced measures to encourage land reform, combat poverty, and expand healthcare services. Declining a second presidential term, he became an elder statesman, focusing on charitable work in combating poverty and HIV/AIDS through the Nelson Mandela Foundation.

He gained international acclaim for his activism, having received more than 250 honors, including the Nobel Peace Prize, the US Presidential Medal of Freedom, and the Soviet Lenin Peace Prize. He is held in deep respect within South Africa, where he is often referred to by his Xhosa clan name, Madiba, or as Tata (Father), and described as the Father of the Nation.