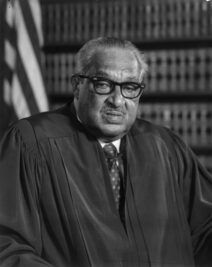 Thurgood Marshall was an Associate Justice of the Supreme Court of the United States, as its first African-American justice.

Before becoming a judge, Marshall was a lawyer who was best known for his high success rate in arguing before the Supreme Court and for the victory in Brown v. Board of Education, a decision that desegregated public schools.

Before becoming a judge, he was the executive director of the NAACP Legal Defense and Educational Fund

Marshall once bluntly described his legal philosophy as this: You do what you think is right and let the law catch up.

Thereafter, he dissented from every denial of certiorari in a capital case and from every decision upholding a sentence of death.

In 1987, on the bicentennial celebration of the Constitution of the United States, Marshall stated:

The government they devised was defective from the start, requiring several amendments, a civil war, and major social transformations to attain the system of constitutional government and its respect for the freedoms and individual rights, we hold as fundamental today.

He concluded by saying:

Some may more quietly commemorate the suffering, struggle, and sacrifice that has triumphed over much of what was wrong with the original document, and observe the anniversary with hopes not realized and promises not fulfilled. I plan to celebrate the bicentennial of the Constitution as a living document, including the Bill of Rights and the other amendments protecting individual freedoms and human rights.