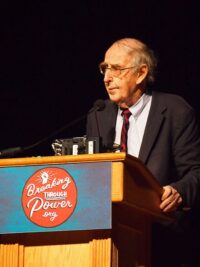 Colman McCarthy is a journalist, teacher, lecturer, pacifist, progressive, long-time peace activist and Director of the Center for Teaching Peace in Washington, D.C. From 1969 to 1997, he wrote columns for The Washington Post and his topics ranged from politics, religion, health, and sports to education, poverty, and peacemaking. He has also written for The New Yorker, The Nation, The Progressive, The Atlantic, The New York Times, and Reader’s Digest. Since 1999, he has written biweekly columns for National Catholic Reporter.