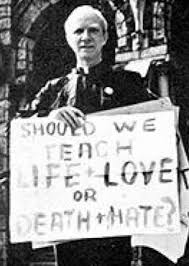 Richard McSorley SJ was an activist committed to pacifism and part of public protest against what he saw as rampant U.S. militarism. His opposition to war and war preparation was reflected in a long arrest record for street demonstrations, the founding of the Center for Peace Studies at Georgetown and the denouncing of the Just War theory and of military solutions to conflict. Often at odds, not only with his government, but also with his own religious order — the Society of Jesus.