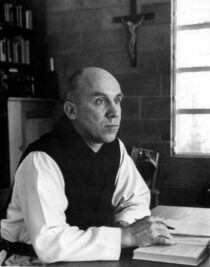 Thomas Merton, OCSO was an American Catholic writer and mystic. A Trappist monk of the Abbey of Gethsemani, Kentucky, he was a poet, social activist, and student of comparative religion.

Merton wrote more than 70 books, mostly on spirituality, social justice and a quiet pacifism, as well as scores of essays and reviews. Among Merton’s most enduring works is his bestselling autobiography The Seven Storey Mountain and was featured in National Review‘s list of the 100 best non-fiction books of the century. Merton was a keen proponent of interfaith understanding. He pioneered dialogue with prominent Asian spiritual figures, including the Dalai Lama, the Japanese writer D.T. Suzuki, the Thai Buddhist monk Buddhadasa, and the Vietnamese monk Thich Nhat Hanh, and authored books on Zen Buddhism and Taoism.