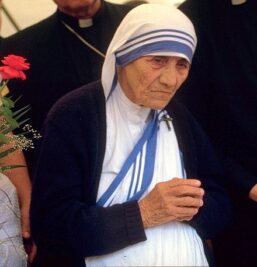 Mother Teresa also known as Blessed Teresa of Calcutta, was a Catholic nun and missionary. She lived for most of her life in India.

Mother Teresa founded the Missionaries of Charity, which runs hospices and homes for people with HIV/AIDS, leprosy and tuberculosis; soup kitchens; dispensaries and mobile clinics; children’s and family counseling programs; orphanages; and schools. In addition to the traditional three vows of poverty, chastity & obedience of religious communities, the Sisters of Charity have a fourth vow, to give wholehearted free service to the poorest of the poor.

Mother Teresa was the recipient of numerous honors, including the 1979 Nobel Peace Prize. In December 2015, she was recognized as a saint by the Roman Catholic Church.

An authorized biography of her life was published by Navin Chawla in 1992.