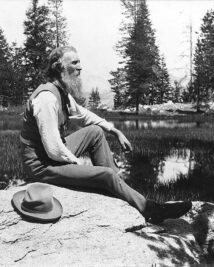 John Muir also known as “John of the Mountains”, was a Scottish-American naturalist, author, environmental philosopher and early advocate of preservation of wilderness in the United States. His letters, essays, and books telling of his adventures in nature, especially in the Sierra Nevada of California, have been read by millions. His activism helped to preserve the Yosemite Valley, Sequoia National Park and other wilderness areas. The Sierra Club, which he founded, is a prominent American conservation organization.

In his later life, Muir devoted most of his time to the preservation of the Western forests. He petitioned the U.S. Congress for the National Park bill that was passed in 1890, establishing Yosemite National Park. The spiritual quality and enthusiasm toward nature expressed in his writings inspired readers, including presidents and congressmen, to take action to help preserve large nature areas. He is today referred to as the “Father of the National Parks” and the National Park Service has produced a short documentary about his life.

Muir was noted for being an ecological thinker and political spokesman, whose writings became a personal guide into nature for countless individuals, making his name “almost ubiquitous” in the modern environmental consciousness.