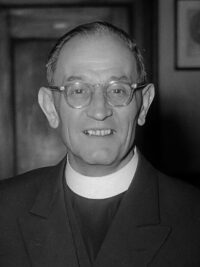 Martin Niemöller was a German anti-Nazi theologian and Lutheran pastor. He is best known for his statement, First they came for the Socialists, and I did not speak out because I was not a Socialist …… and there was no one left to speak for me.

He was a national conservative and initially a supporter of Adolf Hitler, but soon became one of the founders of the Confessional Church, which opposed the Nazification of German Protestant churches. He was imprisoned in Sachsenhausen and Dachau concentration camps from 1937 to 1945 and narrowly escaped execution. After the war he expressed deep regret about not having done enough to help the victims of the Nazis. He turned away from his earlier nationalistic beliefs and was one of the initiators of the Stuttgart Declaration of Guilt. From the 1950s on, he was a vocal pacifist and anti-war activist, and vice-chair of War Resisters’ International from 1966 to 1972. He met with Ho Chi Minh during the Vietnam War and was a committed campaigner for nuclear disarmament.