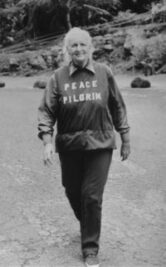 She was the first woman to walk the entire length of the Appalachian Trail in one season and she walked across the United States at least eight times. She was a frequent speaker at churches, universities, and national radio and television networks.

Expressing her ideas about peace, she referred to herself as “Peace Pilgrim” and her only possessions were the clothes on her back. She had no organizational backing, carried no money, and would not even ask for food or shelter. When she began her pilgrimage she had taken a vow to remain a wanderer until mankind has learned the way of peace, walking until given shelter and fasting until given food.