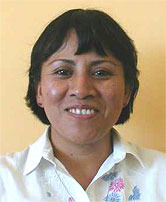 Digna Ochoa was a human rights lawyer in Mexico. Her career involved representation of various dissidents and in some cases raised allegations of human rights abuses including torture by government authorities, particularly the army. Because of her work, she was abducted several times and the Inter-American Human Rights Court recommended protection for her. She went into exile in Washington, DC and while there, was presented with Amnesty International’s Enduring Spirit Award in Los Angeles by actor Martin Sheen.

In 2001, she returned to Mexico City and she was killed on October 19, at her law office in Mexico City. A note was found warning that the same thing could happen to others.