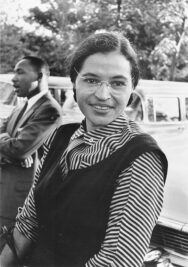 Rosa Parks was an African American civil rights activist, who is best known for an incident that occurred in 1955, in Montgomery, Alabama, when she refused to give up her seat in the colored section on a public bus to a white passenger, after the white section was filled.

The United States Congress called “the first lady of civil rights” and “the mother of the freedom movement”. Her birthday, February 4, and the day she was arrested, December 1, have both become Rosa Parks Day.