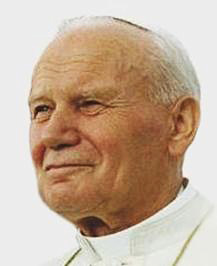 Pope John Paul II is the author of The Hundredth Year (Centesimus annus), an encyclical written on the hundredth anniversary of Rerum novarum, an encyclical issued by Pope Leo XIII in 1891. It is part of Catholic social teaching and examines contemporaneous political and economic issues.

The encyclical refutes Marxist/communist ideology and condemns dictatorial regimes that practiced it. It also condemned reactionary regimes that persecuted their populations, ostensibly to combat Marxism/communism.

The encyclical expounds on issues of social and economic justice and includes a defense of private property rights and the right to form private associations, including labor unions. It compares socialism to consumerism, identifying atheism as the source of their common denial, the dignity of the human person.

The reoccurring themes of social and economic justice mentioned in The Hundredth Year reiterates foundational beliefs in the social teaching of the Catholic Church and calls on the State to be the agent of justice for the poor and to protect human rights of all its citizens.