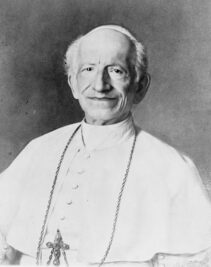 Pope Leo XIII is well known for the development of social teachings with his famous papal encyclical Rights and Duties of Capital and Labor (Rerum novarum) and his attempts to define the position of the Catholic Church with regard to modern thinking.

Rights and Duties addressed the condition of the working classes and discussed the relationships and mutual duties between labor and capital, as well as government and its citizens. Of primary concern was “the misery and wretchedness pressing so unjustly on the majority of the working class. It supported the rights of labor to form unions, rejected socialism and unrestricted capitalism, while affirming the right to private property.

Rights and Duties is considered a foundational text of modern Catholic social teaching and many of its positions were supplemented by later encyclicals, in particular Pius XI’s In the 40th Year (Quadragesimo anno), John XXIII’s Christianity and Social Progress (Mater et magistra), and John Paul II’s The Hundredth Year (Centesimus annus).