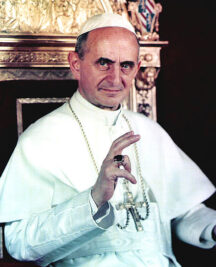 Pope Paul VI succeeded Pope John XXIII and continued the Second Vatican Council which he closed in 1965, implementing its numerous reforms, and fostered improved ecumenical relations with Eastern Orthodox and Protestants, which resulted in many historic meetings and agreements.

After the council had concluded its work, Paul VI took charge of the interpretation and implementation of its mandates.The magnitude and depth of the reforms affecting all fields of Church life during his pontificate exceeded similar reform policies of his predecessors and successors.

He saw himself as a humble servant for a suffering humanity and demanded significant changes of the rich in North America and Europe in favor of the poor in the Third World.