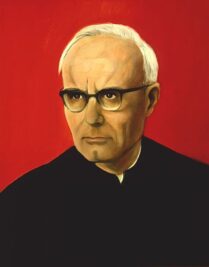 Karl Rahner, S.J. was a German Jesuit priest and theologian who, alongside Henri de Lubac, Hans Urs von Balthasar, and Yves Congar, is considered one of the most influential Catholic theologians of the 20th century.

Rahner’s influence at Vatican II was thus widespread, and he was subsequently chosen as one of seven theologians who would develop Light of the Nations (Lumen gentium), the dogmatic explication of the doctrine of the Church. The Council’s receptiveness towards other religious traditions may be linked to Rahner’s notions of the renovation of the church, God’s universal revelation of salvation and his desire to support and encourage the ecumenical movement.