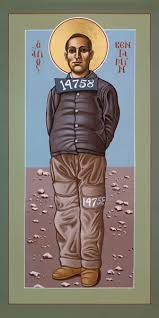 Ben Salmon was an American Catholic pacifist, conscientious objector and outspoken critic of just war theory, who believed no war could be morally justified. He refused to fight in the First World War and was arrested and charged with desertion and spreading propaganda. He was sentenced to death, but later re-sentenced to 25 years hard labor. After the war, the government sent him to a ward reserved for the “criminally insane” at St. Elizabeths Hospital in Washington, D.C. Eventually he was pardoned and released along with 32 others and given a dishonorable discharge from the military service he had never joined. Upon his release, Salmon led a quiet life with his family, but his prison ordeal, which included beatings and force-feedings, had permanently damaged his health and he died of pneumonia in 1932.

His opposition to the “Just War Theory” put him at odds with the leadership of the Catholic Church. Archbishop James Gibbons, the de facto head of the Catholic Church in the U.S., had directed that all Catholics were to support the war and the majority of Catholic bishops supported President Wilson, citing the just war teaching of the Church. In 1918 Cardinal John Farley of New York remarked that “criticism of the government irritates me. I consider it little short of treason… Every citizen of this nation, no matter what his private opinion or his political leanings, should support the President and his advisers to the limit of his ability.” Salmon’s position was so offensive to others in the Church that some priests refused him the Sacraments even when he was sick and in prison.