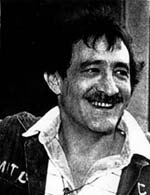 Mitch Snyder was an American advocate for the homeless. He joined the Community for Creative Non Violence (CCNV) in Washington, D.C. CCNV was at that time operating a medical clinic, a pretrial house, a soup kitchen, a thrift store and a halfway house. CCNV came out of a discussion group about the Vietnam War at George Washington University. CCNV was also very active in nonviolent direct action in opposition to the Vietnam War. Snyder became the driving force of CCNV but worked with many deeply committed people including his wife and professional partner, Carol Fennelly; Mary Ellen Hombs, with whom he co- authored Homelessness in America: A Forced March to Nowhere; and Ed and Kathleen Guinan.

He and CCNV pushed and prodded the District of Columbia, the local churches and temples and mosques, as well as the federal government to open space at night for homeless people, and worked to staff the space that was made available. Through demonstrations, public funerals for people who had frozen to death on DC streets, breaking into public buildings, and fasting, CCNV forced the creation of shelters in Washington and made homelessness a national and international issue.