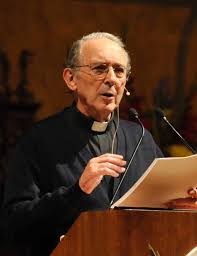 Jon Sobrino, S.J. is a Jesuit Catholic priest and theologian, known mostly for his contributions to liberation theology.

On November 16, 1989 he narrowly escaped the murder of the University of Central America (UCA) scholars by an elite unit of the Salvadoran Army. By a coincidence, he was away from El Salvador when members of the military broke into the rectory at the UCA and brutally murdered his six fellow Jesuits, Ignacio Ellacuria, Segundo Montes, Juan Ramón Moreno, Ignacio Martin Baro, Amando López, and Joaquín López y López, and their housekeeper Elba Ramos and her 15-year-old daughter Celina Ramos. The Jesuits were targeted for their outspoken work to bring about resolution to the brutal El Salvador Civil War that left about 75,000 men, women, and children dead –mostly civilians.

He has remained an outspoken proponent of peace, joining protests in the continued training of Latin American military officers in torture techniques at the Western Hemisphere Institute for Security Cooperation (formerly known as the US Army School of the Americas) at Fort Benning, GA.