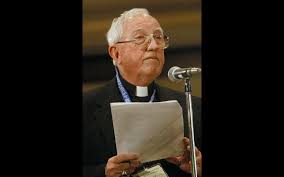 Walter Francis Sullivan was the Catholic bishop from Richmond, Virginia from 1974 to  2003.

He served on the boards of the Churches’ Center for Theology and Public Policy in Washington, D.C.; the Virginia Interfaith Center for Public Policy; the Christian Children’s Fund based in Richmond; the Catholic Committee of Appalachia; and numerous diocesan boards. He had been on the boards of the National Catholic Office for Persons with Disabilities and on the administrative board of the National Conference of Catholic Bishops. Bishop Sullivan was a national leader of the religious community’s involvement in the work of justice and peace. He served as Bishop-President of Pax Christi USA, the national Catholic peace movement, from 1991 until 2001. He also served on the writing committee for the 10th anniversary statement of the U.S. Catholic Bishops’ peace pastoral, “The Harvest of Justice is Sown in Peace” (1993).