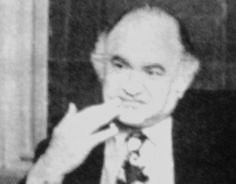 Jacobo Timerman was a Soviet-born Argentine publisher, journalist, and author of Lithuanian Jewish descent, who is most noted for his confronting and reporting the atrocities of the Argentine military regime’s Dirty War during a period of widespread repression in which an estimated 15,000 political prisoners were “disappeared.” He was persecuted, tortured and imprisoned by the Argentine junta in the late 1970s and was exiled in 1979 with his wife to Israel. He was widely honored for his work as a journalist and publisher.

In Israel, Timerman wrote and published his most well-known book, Prisoner Without A Name, Cell Without a Number (1981), a memoir of his prison experience that added to his international reputation. A longtime Zionist, he published a strongly critical book about Israel’s 1982 Lebanon war.

Timerman returned to Argentina in 1984, and testified to the National Commission on the Disappearance of Persons. He continued to write, publishing books in 1987 about Chile under the Augusto Pinochet regime and in 1990 about Cuba under Fidel Castro.