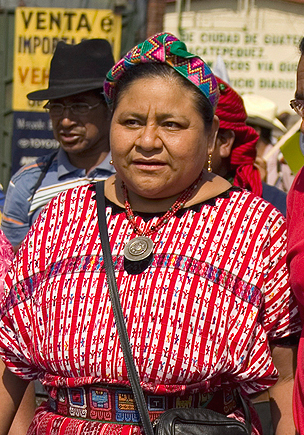 Rigoberta Menchú Tum is a political activist from Guatemala. Menchú has dedicated her life to publicizing the rights of Guatemala’s indigenous feminists during and after the Guatemalan Civil War (1960–1996), and to promoting indigenous rights in the country. She received the Nobel Peace Prize in 1992 and the Prince of Asturias Award in 1998. She is the subject of the testimonial biography I, Rigoberta Menchú (1983) and the author of the autobiographical work, Crossing Borders. Menchú is a UNESCO Goodwill Ambassador. She has also become a figure in indigenous political parties and ran for President of Guatemala in 2007 and 2011.