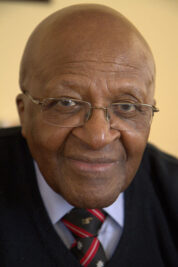 Desmond Mpilo Tutu was a South African social rights activist and retired Anglican bishop who rose to worldwide fame during the 1980s as an opponent of apartheid.

Tutu was active in the defense of human rights and used his high profile to campaign for the oppressed. He campaigned to fight HIV/AIDS, tuberculosis, poverty, racism, sexism, homophobia and transphobia. He received the Nobel Peace Prize in 1984; the Albert Schweitzer Prize for Humanitarianism in 1986; the Pacem in Terris Award in 1987; the Sydney Peace Prize in 1999; the Gandhi Peace Prize in 2007; and the Presidential Medal of Freedom in 2009. He compiled several books of his speeches and sayings.