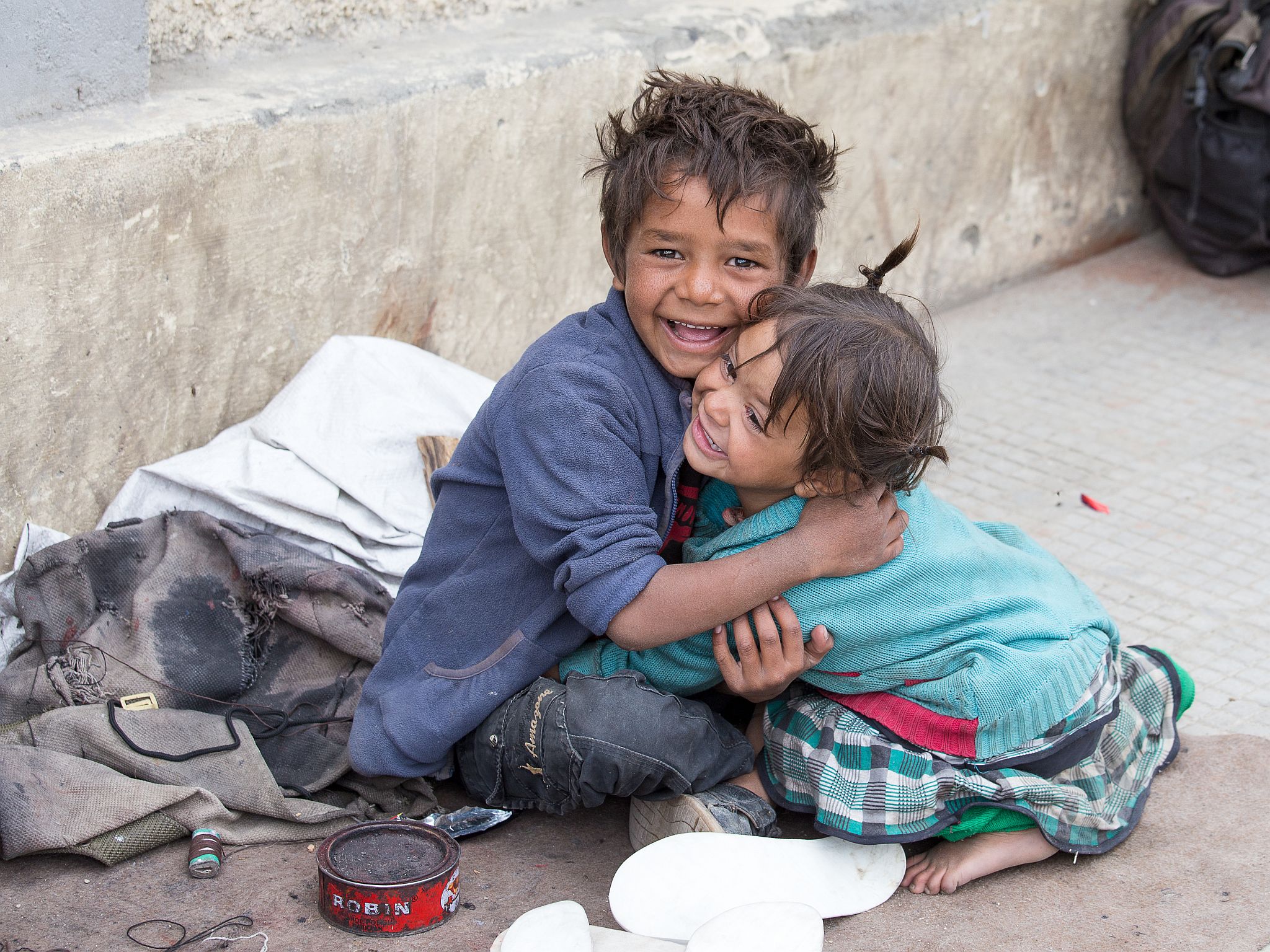 Of the Earth’s population of approximately 7 billion people:

The State of Food of Insecurity in the World, Food and Agriculture Organization of the United Nations

In 1820 the difference in income between the richest and poorest countries was 3 to 1.

Recent research indicates that these trends are continuing.

The top 1% of the world’s richest people have as much wealth as 57% of the poorest people in the world.

The 3 richest persons have more assets than the combined Gross National Product (GNP) of the 48 poorest nations – 25% of the world’s countries.

In 2018 the world’s billionaires got richer by $2.5 billion — each day, while the poorest half of humanity got poorer by $500 million each day.

There are now twice as many billionaires as there were at the time of the financial crisis in 2008.

A new billionaire was created every 2 days in the past year and they are paying lower tax rates than they have been in decades. Meanwhile 10,000 people die each day because they can’t afford healthcare.

The world’s richest are hiding $200 billion in tax revenue, while 262 million children are left out of school.

Getting the richest 1% to pay just 0.5% extra tax on their wealth, could raise more money than is needed to educate all 262 million children out of school & provide healthcare to save the lives of 3.3 million people.

Every year, nearly 11 million children die before reaching their 5th birthday, most from preventable causes. That is approximately, 30,000 children per day. Another 300 million children suffer from illnesses caused by lack of clean water, poor nutrition and inadequate health services and care.

The world spends as much money on fragrances ($28 billion) as all of Africa and the Middle East spends on education.

The world spends almost as much as money on toys and games ($86 billion) as the poorest 20% of the world’s poor people earn in a year.

The US and Europe spend nearly 90 times as much on luxury items ($800 billion) as the amount of money that would be needed to provide safe drinking water and basic sanitation for those people in the world who do not have these things.

The world spends 4 times as much on alcohol as on international development aid.

Each year, the world spends:

There is a direct connection to national security and personal insecurity. The world spends $975 billion on military spending each year but only $78 billion on international development aid.

Of the 100 largest economic entities in the world, 51 are corporations and 49 are countries.

The sales of each of the world’s top 5 corporations are bigger than the Gross Domestic Product (GDP) of 182 countries. For example, Wal-Mart and Exxon-Mobil each had annual sales greater than the GDP’s of Saudi Arabia, Poland and Greece.

People living in high income countries can expect to live up to 10 years longer.
World Bank

Income inequality in the U.S. is at its highest level in more than 50 years.
U.S. Census Bureau

The federal poverty thresholds for 2019 were:

Despite being the wealthiest nation on earth, the US has the widest gap between rich and poor people of any industrialized nation.

The official poverty rate in America is 11.8% — about 37 million people — about the population of Canada.

50% of Americans over 65 would live in poverty without Social Security.

33% of Americans live in poverty at least 2 months a year.

“Deep poverty” is defined as an annual income of 50% or less of the federal poverty line. Approximately 18 million people in the U.S. live in deep poverty. Those in deep poverty represent about 5% of the total population and 45% of those in poverty.

Deep poverty is frequently accompanied by homelessness. Homeless families are generally young. Nearly 50% of people living in deep poverty are under 25 and more than 33% are single mothers and their children.

“Extreme poverty” is an annual income of $2 or less per person per day ($730 a year) and formerly applied only to people living outside of the US.. However there are approximately 18 million Americans living in extreme poverty.

The United Nations has ratified 17 goals for global development, with goal 1 being to end extreme poverty for the first time in human history by 2030.

There are about 7 million individuals in the U.S. considered to be “working poor” — people who spent at least 27 weeks in the labor force (that is, working or looking for work) but whose incomes still fell below the poverty level.

Increasing the minimum wage to $12.00/hour would enable a single breadwinner, working full time, year round, to earn $24,960 and pull a family of 4 over the federal poverty line. Currently about 33% of all workers earn less than this.

The real value of the minimum wage peaked in 1968. Adjusted for inflation, it is worth 66% of its value then.

The value of the federal minimum wage by year (adjusted for inflation):

Gradually raising the federal minimum wage from $7.25 an hour to $10.10 an hour would boost the incomes of most low-wage workers and lift 900,000 people out of poverty.

33% Americans spent part of the Great Recession in poverty.

Children in Living in Poverty

A child is born into poverty every 41 seconds in America.
Children’s Defense Fund

National Center for Children in Poverty

Children in the U.S. rank 26th in well being among other countries of the world.

The economic losses of not having paid family leave are significant. 25% of U.S. mothers return to work 10 days after giving birth and 33% don’t return at all.

By law, Hungary has 24 months of paid paternal leave. Germany has 14 months and France has 10 months. The U.S. has 0.

Despite having the highest national income among major economically advanced countries, the real child poverty rate in the United States (20%) is among the highest.

Children in single parent families comprise 27% of all American children, yet they account for 62% of all poor children.

Nationwide families in poverty who pay for child care spend an average of 30% of their incomes on it. This is more than housing, utilities, transportation or food.

Of the 45 wealthiest nations of the world, the U.S. ranks 22nd in quality, 16th in affordability and 31st in availability of childcare.

In 31 states, the average annual cost for an infant in center based care is higher than a 1 year tuition and fees at a 4 year public college.

10% of child care centers in the U.S. are accredited.

The median annual wage for a childcare worker in the U.S. is: $24,230 (less than the federal poverty level for a family of 4.)

High income workers are 4 times as likely as low income ones to have paid sick leave and 40 million workers go without.

Early childhood education is inseparable from child care. However child care is often treated as “custodial” and left to parents to figure out, while early education is treated as developmental and worthy of investment.

Research on brain development makes clear that investments in young children yield the highest return in everything from increases in the Gross Domestic Product (GDP) to reductions in crime.

The Head Start program serves only low income children and it serves less than 50% of income eligible pre-schoolers. Its companion program, Early Head Start reaches less than 4% of eligible infants and toddlers.

More than 66% of poor children live in families that have at least 1 wage earner and 40% of low income parents have no access to any paid time off such as sick days, medical leave, parental leave, vacation time etc.

The U.S. is the only wealthy country in the world that does not guarantee workers any paid vacations, paid holidays, paid sick leave or paid maternity leave by federal law.

The U.S. Department of Labor

About 14% of US civilian workers have access to paid family leave.

Some 15 million of the world’s poorest people live and work in municipal rubbish dumps around
the globe.
International Samaritan

People living in dumps scavenge for food and things to sell. They make around $3.25 a day selling the items they find to ‘agents’ and scrap dealers who then sell it.

Pneumonia – commonly spread through a lack of hygiene – is the number one killer of children under 5, accounting for more than 1,000 deaths a day worldwide.

About 100 families live in the Boragaon landfill which is located in Pakistan, about 300 miles from Bangladesh near the border with Bhutan. It’s 94 acres of mostly fresh waste, surrounded by swamplands.

La Chureca, the largest garbage dump in Central America is located on the outskirts of Managua, the capital city of Nicaragua and covers over 4 square miles. Approximately 1,000 people live & work on the “City of Trash” every day.

In Indonesia, more than 2,000 families live on the Bantar Gebang landfill that lies outside of Jakarta.

The 11,000 people who live and work in and near the Guatemala City Garbage Dump rely on the 500 tons of trash that dumped there each day to survive. There is no way to truly know how many people work in the dump, but 4,500 work badges have been documented

“Smoky Mountain” the massive garbage dump outside Manila in the Philippines was known as the largest slum in Asia. It was forcibly dismantled by the government in 1995 but some of the people who had made their living as scavengers there moved to the Payatas dump located in neighboring Quezon City. Known as “the second Smoky Mountain,” Payatas is home to about 3,500 households and where the infant mortality rate is about 33%. In 2000 thousands of people were trapped when a huge landslide of garbage buried them in their shacks and over 200 — many children — died as a result.

Each year USAID provides access to sustainable sources of income for over 900,000 people living in landfills.

Approximately 0.6% of the US federal budget ($3.8 trillion) is allocated for foreign aid. This comes to about $20 billion and includes the following programs: