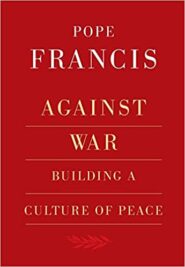 By Pope Francis. A prophetic call for peace & nonviolence and for the world to pursue a different path away from war. Points out that there are millions who do not aspire to war, who do not justify war . . . . especially young people who are asking to do everything possible and seemingly impossible to stop all wars. Asks readers “To commit to building a world that is more peaceful because it is more just, where it is peace that triumphs and not the folly of war; justice, and not the injustice of war; mutual forgiveness, and not the hatred that divides and makes us see the other, the person who is different from us, as an enemy.”  Read more.