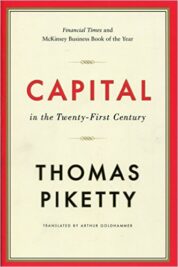 By Thomas Piketty. Analyzes a unique collection of data from twenty countries, ranging as far back as the eighteenth century, to uncover key economic and social patterns and shows that modern economic growth and the diffusion of knowledge have prevented the inequalities on the apocalyptic scale predicted by Karl Marx, but have not modified the deep structures of capital and inequality as much as was thought in the optimistic decades following World War II. The main driver of inequality―the tendency of returns on capital to exceed the rate of economic growth―today threatens to generate extreme inequalities that stir discontent and undermine democratic values. Learn more.