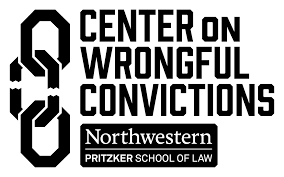 A resource from the Northwestern University Pritzker School of Law, dedicated to identifying and rectifying wrongful convictions and other serious miscarriages of justice. To date, the Center has exonerated more than forty innocent men, women, and children from states around the country, and it receives thousands of inquiries a year.  The CWC also houses some of the nation’s leading legal experts on false confessions and police interrogations and has helped exonerate more than twenty false confessors.

Together with their partners around the globe, the CWC leverages its clients’ real stories of injustice to seek criminal justice reform.  After the CWC helped exonerate six innocent men off Illinois’ death row, Illinois abolished the death penalty in 2011.  The CWC’s expertise on false confessions has also driven sweeping laws around the nation requiring the electronic recording of interrogations, as well as some of the country’s first laws requiring counsel for children in the interrogation room.  The CWC co-founded the National Registry of Exonerations, a database that provides detailed information about known exonerations in the United States since 1989.  CWC faculty members also have published groundbreaking books and articles on the problem of false confessions and engage in public-facing dialogue through traditional and digital media outlets to run educational campaigns about the need for reform. Learn more.