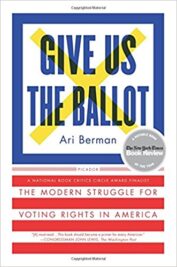 By Ari Berman. Charts both the transformation of American democracy under the Voting Rights Act and the counterrevolution that has sought to limit it from the moment the act was signed into law. The VRA is widely regarded as the crowning achievement of the civil rights movement, and yet―more than fifty years later―the battles over race, representation, and political power continue, as lawmakers devise new strategies to keep minorities out of the voting booth, while the Supreme Court has declared a key part of the Voting Rights Act unconstitutional. Learn more.