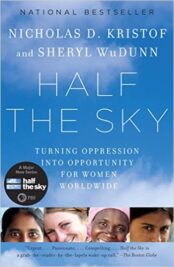 By Nicholas Kristof & Sheryl WuDunn. Argues that greatest unexploited economic resource is the female half of the population & the key to economic progress lies in unleashing women’s potential following the examples of countries such as China have prospered precisely because they emancipated women and brought them into the formal economy, demonstrating that the process is not only the right thing to do; it’s also the best strategy for fighting poverty. Read more.