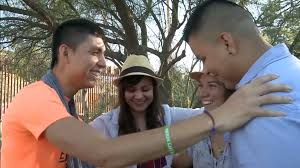 A documentary from Sojourners that is part of the Onward series on immigration. Features the story of Renata, Evelyn, and Antonio who were brought to the U.S. as children and witnessed their parents deportation. Today they are each fighting to be reunited with their families. Other films of the series include: Without a Country (Sin Pais), The Mayor, The Caretaker, Underwater Dreams, Hawo’s Dinner Party, Get to Know Me & Care: Vilma & Dee’s Story. Watch the trailer.