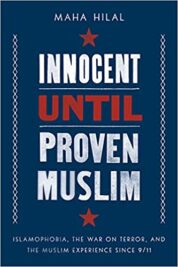 By Maha Hilal. Tells the story of two decades of the War on Terror, exploring how the official narrative has justified the creation of a sprawling apparatus of state violence rooted in Islamophobia and excused its worst abuses. Offers not only an overview of the many iterations of the War on Terror in law and policy, but also examines how Muslim Americans have internalized oppression, how some influential Muslim Americans have perpetuated collective responsibility, and how the lived experiences of Muslim Americans reflect what it means to live as part of a “suspect” community. Along the way, this marginalized community gives voice to lessons that everyone can learn from their experiences, and to what it would take to create a better future. Read more.