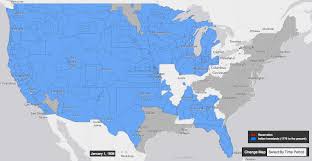 A resource from University of Georgia historian Claudio Saunt that offers a time-lapse vision of the transfer of Indian land between 1776 and 1887. As blue “Indian homelands” disappear, small red areas appear, indicating the establishment of reservations.

The project’s source data is a set of maps produced in 1899 by the Bureau of American Ethnology — a research unit of the Smithsonian that published and collected anthropological, archaeological, and linguistic research on the culture of North American Indians, as the nineteenth century drew to a close. Learn more.