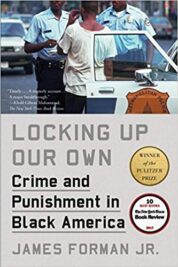 By James Forman Jr. Seeks to understand the war on crime that began in the 1970’s and why it was supported by many African American leaders in the nation’s urban centers. Tells stories of politicians, community activists, police officers, defendants, and crime victims trapped in dilemmas―from the men and women in court, to officials struggling to respond to a public safety emergency. Explains why the U.S. society became so punitive and offers important lessons to anyone concerned about the future of race and the criminal justice system in this country. Read more.