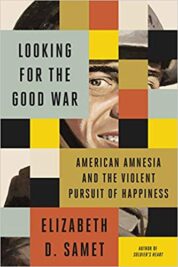 By Elizabeth D. Samet. Reexamines the literature, art, and culture that emerged after World War II, to bear on the complexity of the postwar period in national life. Exposes the confusion about American identity that was expressed during and immediately after the war, and the deep national ambivalence toward war, violence, and veterans―all of which were suppressed in subsequent decades by a dangerously sentimental attitude toward the United States’ “exceptional” history and destiny.

As the United States reassesses its roles in Afghanistan and the Middle East, argues that the time has come to rethink our national mythology: the way that World War II shaped our sense of national destiny, our beliefs about the use of American military force throughout the world, and our inability to accept the realities of the twenty-first century’s decades of devastating conflict. Read more.