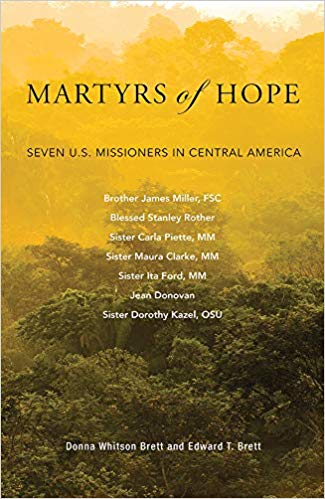 By Donna Whitson Brett and Edward Brett. Tells the sto­ries of seven U.S. missioners who paid the ultimate price for the poor of Central America. Two of them have been beat­ified by the Catholic Church: Fr. Stanley Rother and Brother James Miller, who were killed in Guatemala. Four of the missioners were killed by the military in El Salvador: Maryknoll Sisters Ita Ford and Maura Clarke, Ursuline Sister Dor­othy Kazel, and lay-missioner Jean Donovan. The seventh was Maryknoll Sister Carla Piette, a “martyr of charity,” who also laid down her life for her neighbors in El Salvador. Although their lives, back­grounds, and beliefs varied widely, they held a common faith and hope: to better the lives of the poor among whom they lived and worked and to challenge the unjust sta­tus quo in the countries where they ministered. Read more.